Something very different this week. The Penguin Cafe Orchestra is a band from the 1980/90’s with their own very different Avant-Pop style led by English guitarist Simon Jeffes and cellist Helen Liebmann.

I first came across this band watching the Australian stop animation movie “Mary and Max”. The “based on fact” story is about an unlikely pen-pal friendship between a young Australian girl and a morbidly obese 44-year-old Jewish atheist from New York. It is at times wonderfully funny and a desperately sad film. It is beautifully rendered and well worth a watch. You can see a trailer by clicking here 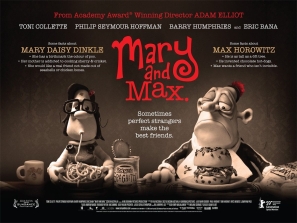 One of the issues the film deals with is the fact that Max is on the Autistic Spectrum. Mary sees that as a disability and Max sees it as an integral part of his personality and not a disability that needs to be cured. It made me think a lot about difference and how we perceive it in a increasingly segmented society.

We all are individuals with our own distinctive personalities, quirks and idiosyncrasies that makes us who we are. For most it makes little difference to our day to day lives, for others it creates huge problems that can make life almost impossibly difficult.

Making a Spectacle of Yourself

He takes an eternity to be spontaneous and can quickly prevaricate

His world is a one man play were he has many parts, none of them suit him

Biog Jeff Price Jeff is a poet and writer. He has performed at many  venues through out the UK and Europe including the Prague Fringe Festival and the Bristol Poetry Festival. He embarrassed himself with an appearance in ITV’s Airline programme reciting poetry to Easyjet passengers in Newcastle Airport. He was the founder and organiser of the Poetry Vandals. He organises poetry events including The Great Northern Slam at Northern Stage and is a regular performer at venues throughout the UK and in the South West of France.  Jeff has a Master's Degree in Poetry and Creative Writing from Newcastle University. His work has appeared in many anthologies, E-Zines and poetry websites. He has written for a number of magazines. Jeff’s poetry often hides a sharp political message behind its humour. His first full collection “Doors” was published in 2006 and  "Toe in The Tarn"  was published in 2012. He has released a CD/Book titled Live at La Sirene. “The wordplay of Roger McGough delivered with the voice of a Geordie Adrian Mitchell. Great entertainment – count me in, I’m a fan”. Mike Jones Quercy Unplugged “Great storytelling and a sharp eye for human foibles with powerful images... Highly recommended” Kate Fox, Poet in Residence on BBC Radio Four's "Saturday Live View all posts by Jeff Price

One thought on “Making a Spectacle of Yourself”

This site uses Akismet to reduce spam. Learn how your comment data is processed.