Eurythmics, Aretha Franklin “Sisters Are Doin’ If For Themselves.”

In this blog I mentioned before that I am the Father to five daughters. Suzi and Amy to

my second marriage and Emma, Hester and Madeleine are my inherited daughters (I don’t like the word “Step”) from my marriage to Lynda. They are my delight and my joy. They have also taught me so much.

I was born into a typical patriarchal Northern family. My Dad was the head of the family and his word was God. My Mother left her job as a nurse when they started a family and brought up myself and my three brothers and my sister. She cooked, cleaned and was responsible for the house. My Dad went out to work and earned the money. This is the way it was and as a youngster I saw that as normal. My friend’s families were like that, the world was like that.

As I got older I began to notice that things were not as simple as they seemed. My Mother was no docile domestic home keeper, she exercised her own power in the home but it was more discrete than my Father’s “Do as I say” attitude.

My Mother loved musicals and would often drag us along to the cinema to watch films like “Seven Brides for Seven Brothers” or “The King and I”. She had a collection of LP’s of the songs and loved to listen to them. The record player broke and she asked my Father to get a new one. She told him to get one of those fancy radiograms that were very popular. My Dad, never one to spend money he didn’t have to, did nothing about it. One day my

Mother announced to my Father not to bother getting the stereo-gram as she had ordered one from the Catalogue Lady* and she would pay monthly for it. My Dad was outraged. He said they were overpriced  and he hated the idea of paying all that interest on the catalogue purchase. He stormed out of the house returning a few hours later with a beautiful wooden stereo-gram. My Mother was delighted. Later that day I asked my Mother if she had cancelled the order with the Catalogue Lady. She smiled and said “What order?” and winked at me.

The Seventies and the rise of the feminist movement would change much. Wielding discrete power, women demanded much more that a supporting role in the family and in society as a whole.

In 1977 I read The Woman’s Room by Marilyn French, it put into words all the things that had been swirling around in my head, it showed me the world from a woman’s perspective in a way that no other book ever had before. It changed me and although it is difficult, if not impossible for a man to be a feminist, I try my best.

This week’s song needs no further introduction but to say although the fight for equality has made much progress there is still so much more to do.

From the day a man said

It all went wrong

Not that I had any idea

When, why or where

It was the way the world was

The way things had been

The way they would stay

“The Woman’s Room” changed me

It asked the questions

In its pages I found a world

I had lived in all my life

I made goat’s cheese quiche

I changed my attitudes

*The Catalogue Lady would have a catalogue of products from a company such as Littlewood’s and you could order from the catalogue and pay for them weekly. The prices were high and the interest payments even higher but for working class families it was often the only way to get credit.

Madness “One Step Beyond”

There is a salvation in Madness’s songs, they raises you up. I have never seen the band live but I imagine it is one of those gigs where no one can sit down and you come out feeling

Music can do so much, it can move you to tears, it can make you angry with the world and it can bring you joy. Writing this blog and looking at the different types and styles of music that I have enjoyed over the years I can see why I love music so much. It’s an every day fix, it can change my mood, it can help me through difficult times. My only regret is that I have no singing voice and can not hold a note to save my life. My wife is in a choir and the people who organise it brag that they can take anyone and get them to sing. They haven’t heard my voice.

This week’s poem is a bit of fun like a Madness single it is designed to put a smile on your face. Save it for one of those days when nothing is going right or when you are feeling a little low.

Headphones on hippies and overweight Britains

Microwave meals and dogs on strings

Back to front baseball caps and a cold bathtub

smokers in the doorways and deep fried pub grub

Charvers with pitbulls and girls with tattoos

When a new born baby grins

when I count my lottery wins

When everything is as it should

I simply remember my most hated things

and then I don’t feel so good

It was 1977 when I saw The Stranglers at the City Hall in Newcastle. I remember the 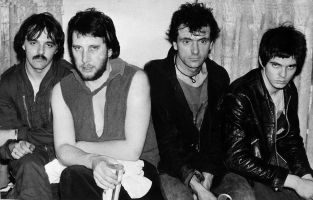 electrifying power of the band and the fact that so few people could create so much noise was amazing. We were right up in the Gods but I felt pinned against the wall, the bass line hammering into my chest.
Like a lot of the punk bands at the time there seemed little separation between them and the fans. In fact by the end of the gig the stage was full of pogoing fans.
The theme of the song was something I disagreed with. There were heroes, people like Tony Benn, Dennis Skinner and Trade Union leaders like Arthur Scargill plus a little known back bench MP who always seemed to stand up for the marginalised and the oppressed called Jeremy Corbyn (I wonder what happened to him?).
I had also been very involved in supporting the Miners and I had seen the militarisation of the police and the impact that the Tory policies were having on the mining communities. Whilst the Police and the Government did everything they could to defeat the Miners other groups in society came to their support. Ordinary people all over the country gave magnificent support to the Miners in whatever way they could. I remember one Christmas being told by the local Miners Wives Support Group that they didn’t know what to do with all the turkeys they had been given. Sadly they were badly let down by their political leaders who had the chance to back the miners but did not.
Over the last couple of weeks I have been seething with anger about the Home Office treatment of the “Windrush Generation” and I can guarantee that behind the words nothing will change, they are metering the same hard faced treatment to migrants they have been heaping on the unemployed, low paid and the disabled. Their selfishness and greed has no limits and I despair when I see this crippled and broken world we are leaving to our children. If there ever was a time for the heroes to rise up it is now.
My poem this week is one person’s story. I think a big part of the problem is instead of many people seeing problems as statistics i.e too many immigrants, too many unemployed etc. What they need to do is see the person. Many people wanted the government to clamp down on immigrants and the government felt they had the authority to create a hostile environment but when they saw the reality of the damage it has done to peoples lives they are disgusted. See the person, see their problems and ask what we can do to help rather than how do we make the problem go away.

No address, no job
No work, no home
No matter, not important
Invisible and alone

It isn’t often I click on a Rolling Stones track when I am cruising Spotify. They never

appealed to me in the way that many other bands have but they are a party favourite and when I ran a disco you couldn’t have a night without them. You were always guaranteed to get everyone up on the dance floor if you played “Jumpin’ Jack Flash” or “Let’s spend the night together”. It’s remarkable that they are still touring and even more remarkable  that all of them (except Brian Jones) are still alive.

However the track was playing on the radio recently and I started to think about who Ruby Tuesday was and this week’s poem is her story (although a completely invented one) in her voice.

I am not Ruby Tuesday

My name is Roya Turkhel

But no one took the time

To learn how to pronounce my name

They gave me another instead

I am a descendant of Ahmad Shah Durrani

The founder of Afghanistan

I am a woman of no importance

To them I am an insignificance

The cleaner of plates

The sweeper of floors

They robbed me of my name

Made it into a monument

To their hubris and importance

They never asked me

Where I came from

I am generations of yesterdays

Of Princes and Princesses

To them I am a dark face

From a dark corner of the world

Is an asset that enriches them

I cling to yesterday

Because the mountains of the Kush weep bitter tears

That flow through the dusty streets of Kabul

Because in Kandahar the desert blown sand

I am not Ruby Tuesday