This is not one of Joni Mitchell better known tracks but it is a very beautiful and haunting song. It has been requested on the Poetry JukeBox by my friend Stephen

Hatton. The song references aeroplanes and the female aviator Amelia Earhart who was the first female aviator to fly solo across the Atlantic Ocean. During an attempt to circumnavigate the Earth in 1937 she and her navigator Fred Noonan disappeared over the central Pacific Ocean.

The song is a conversation between the two of them as Joni compares life and love and reflects that the things we think as true are not, she calls them “false alarms”. We think love will last forever but it usually doesn’t, we think we will live for ever but we don’t. Our ambitions can often be beyond our reach but that doesn’t mean we shouldn’t try. Like a lot of Joni’s lyrics they are unresolved and leave the listener reflecting on their own lives.

I was struck by the images in the song of the vapour trails of aeroplanes crossing the skies, here is the first verse…

I was driving across the burning desert

When I spotted six jet planes

It was the hexagon of the heavens

It was the strings of my guitar

Amelia, it was just a false alarm

Each vapour trail tells a hundred stories of people and places, where are the planes going, what are the stories of the people travelling in them? I love sitting in airports and imagining those stories, the lovers reunions, the tired traveller returning home, the young person about to start a great adventure in a new country. They won’t always work out the way they want but we humans often face these challenges with an undeserved optimism. We hope it will all work out and sometimes it does and sometimes it’s just a “false alarm”.

Waiting for the Gate

Beyond the X-Rays and the groans, moans and the fondling hands

Through the corridor of shimmering floors, Toblerones and Tequila

Suits and sari’s rub shoulders with shorts and crop tops

Backpacks and trolleys trundle along to the distant hum of headphones

Rowdy stag parties have been drinking Guinness since dawn

Outside on the runway planes heave themselves into the sky

The impossible takes the improbable in to the great beyond

On Wednesday night at Cobalt Studios in Newcastle I went to Born Lippy. A night of spoken word, poetry, comedy with a bit of hip hop and Slam thrown in for good luck. The night is run by Don Jenkins and Tom Conway. This month’s was a special supported by 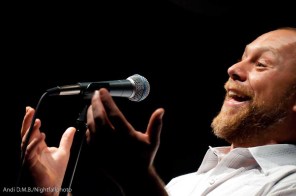 Buddy is a force that I have seen before, the first time was in 2004 at a night I ran at the Cumberland Arms. He had been touring around Europe and arrived in Newcastle suffering from a severe throat and chest infection. Despite the cough he was determined to go on and we loaded him up with throat lozenges and he took to the stage and gave a performance I have never forgotten. He took the room by the scruff of the neck and made it his own. His performance was electric. Last night in Newcastle he gave us an encore.

It isn’t easy to describe Buddy’s poetry it is part spoken word, part story telling, it is his life written in beats and metre. His poetry takes no prisoners but his command of the stage does not leave you feeling alienated or sidelined. It draws you in to his world. It is clear he enjoys it, he feeds off it, it re-hydrates him.

When he performed the poem featured in the video Convenience Store every hair on my body stood on end, it was electrifying. I have been going to poetry events for a very longtime and you can get a bit cynical sometimes but poets like Buddy re-hydrate me as well. They make we want to be a better writer and make me realise I have a long way to go.

Click here to get a copy of “Stunt Walker”

After Buddy left Newcastle in 2004, I wrote the following poem

Buddy can you spare a rhyme

He came coughing out of the waves of the North Sea

The phlegm of the journey rattling his bones

Blinking in the glaring spotlight

Looking across the stage and in to the interior

He saw the restless natives waiting

He had been told that Northern people

Were hard as cynicism and had eaten strangers

Spat their eyes out, clean as morning

He planted his feet deep in their earth

Filling his lungs with the vapour of lozenges

He gripped perfection by the throat

Shaking his juju in front of the faces

That peered at him through the smoke

He fired his first salvo across their bows

To the sound of tearing timber

Clawing at the red stained walls

Soon, they danced the hornpipe to his tune

They were his now

They were his children

This song has been submitted by poet Steve May. As he and his wife Pauline approach their 50th wedding anniversary he says this would always be “Their Song”. Music can be like that, totally personal. It achieves a meaning never intended by the singer. 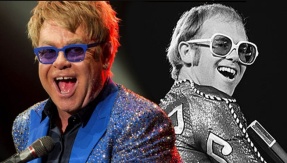 The music for “Your Song” was written by Elton with lyrics by his longtime collaborator, Bernie Taupin. It originally appeared on Elton’s self-titled second studio album (which was released in 1970).  Surprisingly the song only got to number seven on the UK Singles Chart.

Bernie Taupin wrote the song’s lyrics after breakfast one morning on the roof of 20 Denmark Street, London, where Elton worked for a music publishing firm as an office boy, hence the line “I sat on the roof and kicked off the moss”.

Steve told me about a time when travelling through Spain many years ago, he and Pauline camped out in a remote area. In the wee small hours of the morning, a motorbike suddenly started circling their tent and the pair of them lay terrified insideholding on to each other for dear life, when just as suddenly as it arrived, it disappeared.

Love grows in many ways, it comes from moments of joy and tenderness and it is also forged in the furnace of adversity.

Love is a gourmet menu and beans on toast

Love is listening and being heard

Love is rational and often absurd

Love is predictable and full of surprises

Probably the most recognisable opening few chords of any pop song. It also features

some classic lines like “You can check out anytime you like but you can never leave” and was released as a single in February 1977. Writing credits for the song are shared by Don Felder (music), Don Henley, and Glenn Frey (lyrics). The Eagles’ original recording of the song features Henley singing the lead vocals and concludes with an extended section of electric guitar interplay between Felder and Joe Walsh. 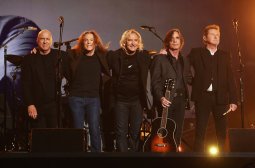 The song is seven minutes long which made it very popular with DJs on radio stations as it gave them plenty of time to go to the toilet and back before the track ended.

This song was requested by Miriam McCormick. Although Miriam admits that she has never been to California this song still evokes strong emotions. She says “Once heard one of the Eagles trying to explain what it’s about. I don’t think they knew themselves …. He concluded by saying it could best be described as being “a song about going from innocence to experience“.

I spent a great part of my working life staying in hotels and although they were all comfortable, they weren’t home. You very quickly grow tired of eating alone or getting trapped in a conversation with a bunch of business men discussing their golf handicaps.

On one occasion, I had stayed in the same hotel chain three nights in a row but in different cities. Each room was identical in every respect. On the last night waiting for sleep I became very confused about where I was and I wrote the name of the town I was staying in on a post-it note and stuck it on the alarm clock. Work had left me stressed out and tired. I often spent my weekends in bed plagued by migraine headaches. The pain sometimes so powerful it would make me vomit.

When I got home and told my wife Lynda about the post-it note she said that it was time to pack the job in and find another way of making a living.

Twelve months later at the age of 53, I was a student starting a Master’s Degree in Poetry and Creative Writing at Newcastle University. I think Lynda supporting me in a new career probably saved my life, I certainly have never been happier and more content then I have been standing in a school hall with 30 kids all fired up and performing their own poetry on a stage in front of the whole school.

Within a couple of years of leaving work my migraines stopped and the psoriasis that covered my legs cleared up. I have not been bothered by either since.

Wet Behind the Ears

I have thrown myself off a cliff

Who has slipped his skin

Demobbed from the rat race

On a tour of duty in Academe

Wet behind my student ears

Striding through the September rain