particular is “What?” I know the lyrics really well and even after listening over and over again I have still no real idea. There are some obvious sexual references. for example:

Men let your wallets flop out,
And women open your purses

(If you want to read the full lyrics click here)
or just bizarre… how about:

Distant cousins, there’s a limited supply.
And we’re down to the dozens, and this is why:
Big Eyed Beans from Venus! Oh my, oh my. 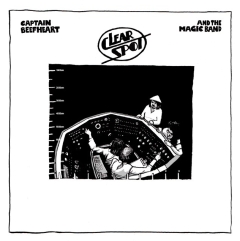 Either way I still loved his albums and “Clear Spot” and “Trout Mask Replica” are two favourites. I like the idea of stitching phrases together or just saying things because you like the way they sound.
Like a lot of writers the Captain (real name Don Van Vliet ) didn’t like to give too much away about the meaning of the lyrics and as he died of Multiple Sclerosis in 2010 we will never know. He was also universally disliked by nearly everyone he worked with and band members would often not get paid or receive credit for song writing. Being talented doesn’t make you a nice person.

This song also means a lot to me because it was the name of a wholefood shop in Corbridge run by two friends Hil and Mel McHugh. The shop didn’t last long and then they both left the UK to live in France. It is a long time since I saw either of them but thanks to Facebook I can see that they are both still alive and well.

“Down to the Dozens” is a line from the song and I always took it to mean that supplies are low or things are running out. When I was a young man, time seemed endless and ideas and ideology were there to explore, experience and I was trying to gain some understanding of the world I was living in. As I approach seventy, the world is so much more unsure, confusing and full of doubt. Time is running out and I am down to the dozens, I do not want to end up as one of those cynical people who mock the youth for their idealism. I want to be one of those people who still “rage against the dying of the light”

Down to the Dozens