The Young’uns: You Won’t Find Me on Benefit Street

There is so much I love about this song. The harmonies are magical and the the sentiments are brilliant. The title refers to “Benefit Street” a documentary that was broadcast on Channel 4 in 2014. It focused on the lives of those living on unemployment benefit and was a tacky program that exploited very vulnerable people.

The image of the North that some people have is of lazy and ignorant Northerners. It is a stereotype that was perpetuated by programs like “Benefit Street”. If you have ever been unemployed and had the indignity of “signing on” you will know that it is no picnic. If you are lucky enough not to have had that experience then watch the fantastic movie “I Daniel Blake” to get an understanding of how dehumanising the whole process it is.

My Father had various periods of unemployment and I have been through the same thing myself. One memory of my Dad was when I was eleven years of age. I was lucky enough to pass my eleven plus and I was sent to St Cuthbert’s Grammar School. This presented my family with a problem. Along with my school uniform, I was required to have a full sports oufits including football and cricket kit.

As my Father was unemployed at the time I knew getting all this kit would be impossible so I didn’t tell him about the sports kit. You were supposed to buy all the uniform from a shop in Newcastle called “Issac Walton’s” but it was expensive. My Dad managed to find a blazer somewhere else that was a similar but not quite the right colour and my mother sewed on a school badge (The Issac Walton blazer had the badge embroidered on the 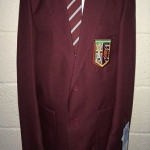 pocket). When sports day came, I told the teacher I had forgotten my sports kit and the next week I did the same.

As each week passed the threats from the sports master increased until I was eventually sent to the Head and was caned for persistently failing to bring my sports kit. What I didn’t realise was that they would inform my parents and when my Father got the letter he asked me what had happened and I explained what I had done. He went straight to the school and told them about our circumstances.

There was much wringing of hands by teachers and my Dad was embarrassed that I had lied to protect them from the expense. The school gave me a full sports kit gleaned from the lost property bin. I was a fine sight in my mismatched blazer and used and badly fitting sports kit. As you can imagine this was a something that didn’t escape the notice of the school bullies.

My poem this week is about the shame we are all made to feel when we have to apply for unemployment benefit.

It is wrought deep into the memory of my class

I stand with the motley crew of the sullen and crestfallen

All poorly shod and dressed in mean and shabby clothes

We are watched over by the honour guard of security men

In case our humiliation should erupt in understandable fury

We are not failures but those who have been failed

We are not unemployable just under employed